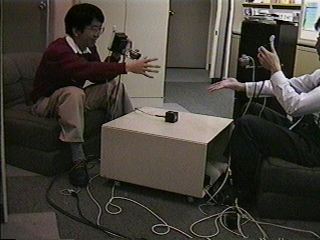 The TransVision system is an attempt to use augmented reality (AR) technology for collaborative designing. The system uses the palmtop video-see-through display instead of bulky head-mounted displays. The user can see a computer-generated 3D model superimposed on the real world view. The position and orientation of the display are tracked by the system such that the computer-generated model appears to occupy real space. Two or more participants can share the same computer model as if it were real. This situation seems similar to shared virtual environments, but there are fundamental differences between shared virtual reality and shared augmented reality approaches. By taking the augmented reality approach, two or more users can see each other without any difficulty. Since the coordinate system of each participant is identical, actions such as pointing gesture are meaningful to all participants. With virtual reality, we have to re-generate and render the human body as well as computer models.